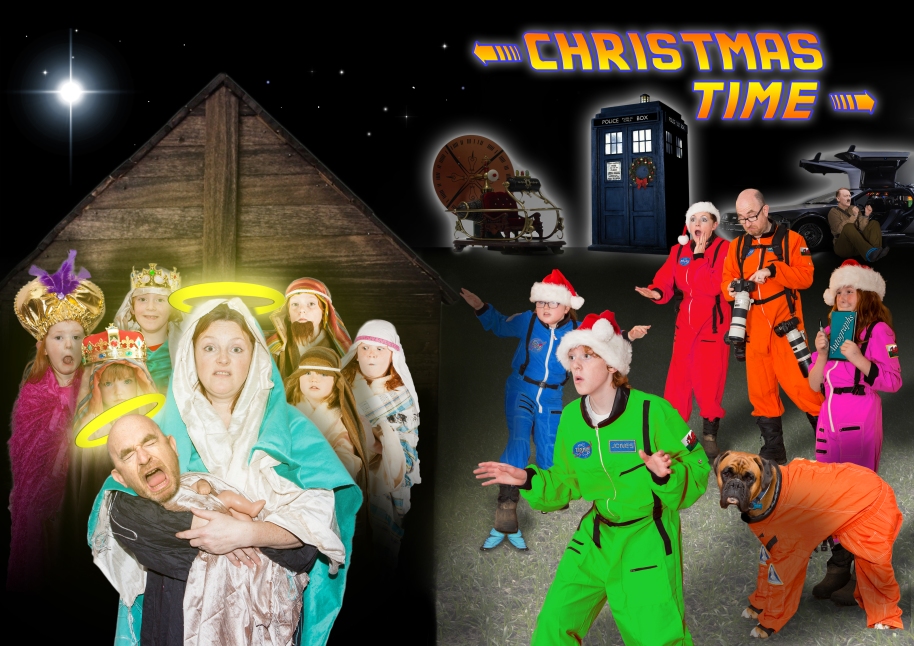 I’ve thought about doing a “Behind The Scenes” for about a decade. Let’s see how it goes.

Every year since 1994, Sally and I have designed a Christmas Card. Hopefully the cards are funny and festive.  Over those years, these have become fairly ambitious and the process has been elemental in the development of my photography and post-processing skills. Some of the cards have contained a lot of detail and it’s always made me a bit sad that the ultimate rendition of all that detail is an A5 card.

Here’s the site which evolves every year to accommodate the new card.   http://www.ashleyjones.co.uk/xmas/

The card starts with a list of ideas (which must relate to something festive) and a lot of brainstorming with the whole family, usually in late October. Almost always I then declare the final idea and that’s that.

The next thing is a very rough sketch of the layout, usually just pencil and paper.  Then we buy props and start the photography.

Back To The Past

Originally, I was only going to have the HG Wells time machine from the 1960 Rod Taylor film. Ultimately it seemed more fun for us to have arrived in different vehicles, so we added the TARDIS and the Back To The Future DeLorean.  I used a PhotoShop Perspective Warp on the TARDIS to get it to sit properly.   And we added a wreath for festiveness.

What’s odd about this year’s card is we had actually had them printed BEFORE the big hullabaloo about Back To The Future. They came back from the printers on 20 October 2015, the day before the date in BTTF 2! We watched all three movies that week and I was a bit surprised to see the bit where Doc Brown proposes 25/12/00 as a date you might visit. No doubt I had remembered this from an earlier viewing.

Back To OUR Past

So, here we are as time travelling holidayers. As well as visiting the birth of Christ I liked the idea of re-using pictures from our previous cards, which is of itself a bit of time travel. So I used alternate shots from the 2009 “The Three Magi” card and the 2011 “While Shepherds Washed Their Socks” card. I have kept all the pictures from all the cards over the years. Often there are literally hundreds of photographs taken so I have lots of choices. I light and shoot the pictures just as if I was doing a “proper” photo-shoot and they are all unnecessarily high resolution images.   A couple of times I have had prints made of the cards at A0 size.  That’s a BIG poster.

The shoots are  less stressful than when the kids were very small, but it is still somewhat of a big production, often done over two days.

Here’s that Nativity scene close up.

I also threw in a couple of time travel memes: Seren is stepping on a butterfly in a nod towards Ray Bradbury’s “A Sound Of Thunder”. It’s a well-established time travel trope but you might have missed it. I read the (very short) book just to be safe:  https://en.wikipedia.org/wiki/A_Sound_of_Thunder

And that’s why Hitler is there. If you are travelling back in time, there is a “To-Do” list:

I worried a bit about having an actually dead Hitler in the picture. Even with a baddie, a cadaver is a bit dark on a Christmas Card. So we have *kidnapped* Hitler, which is why he looks so cross. The body is mine with a re-coloured Hitler head to match it up.

We put a bit of thought into what we might wear.   NASA-style jumpsuits sounded right.  I had actually bought Bryn a NASA suit about five years ago on a visit to the Smithsonian Air and Space museum in Washington DC – I was more excited about it than he ever was.  It wouldn’t fit him nowadays, but it did fit the girls and the dog.   We bought a similar adult-sized one on eBay for the bigger people.  I re-coloured them in post-production to better differentiate us.  I removed the US flags and replaced them with Welsh ones.  I also changed the patches to an embossed name badge and a “Time” logo in the NASA font.

Cags does a nice job exuding excitement, hoping to get one of the all-time-hardest-to-get autographs.  Re-coloured, re-badged and with the book title added in post.

Dog in a Time Suit

YES, we really did put Edd in a suit.  Look how calm he is – he’s such a good dog.  I had to flip him in post for compositional reasons.  I also added a front leg so he didn’t look like an amputee.

Me and Mrs Jones

Finally here’s us.  A nice joke about not paying attention to what’s going on because you are always looking at the world through a lens.   Don’t do that.

First beauty shoot in a year. Chiara is a model and dancer and a million sorts of fantastico!