2 May 2015 brought us The Alphabet Business Convention.  This is a show celebrating the work of the genius that is Tim Smith.  I don’t use the word lightly – I love Tim’s music above all others and his work as a video director is also astonishing.    Tim suffered a series of debilitating strokes in 2008.  It’s fantastic that he was able to attend the event, which he clearly found hugely affecting.  We all did.

Anyway, I took my cameras along.

I have a few internal rules about photographing bands.  I really like to get some pictures with every band member visible.  I always think “How would I feel if there was a picture of my band and you couldn’t see me in it?”  – I think drummers get a particularly raw deal, often sitting in the gloom at the back of the stage, or  lost behind the singer.

I also like to capture some drama and excitement in the pictures.  That’s the motivation behind my use of ultra-wide angle and fish-eye lenses.

Here’s the pictures on Flickr – I’d recommend watching them as a slideshow: 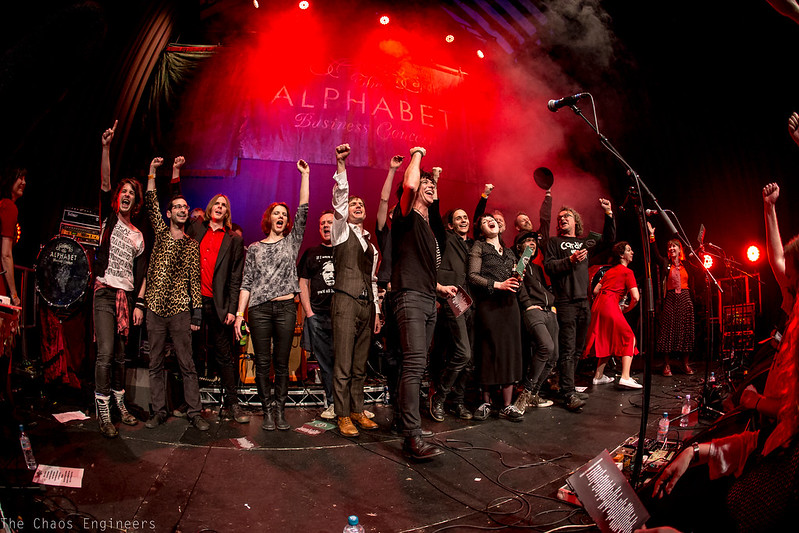 It was a wonderful event and there were some wonderful people there.

Until the next time!

Knifeworld: Don’t Land On Me

Kavus, Mel and I sat down after in a pub in Islington early in 2013 to discuss the next Knifeworld video. Kavus showed me the video to Slade’s 1971 smash “Look Wot You Dun”  The look is stark, with a black background and bright lights, wide angle lenses and right in yer face.

The remit was to get a heightened performance video: like watching Knifeworld play live while the viewer is on psychedelics.
The song is eight minutes long and I went through Bob Drake’s wonderful mix of the song second by second creating an Audio/Video reference chart so I would always know where I was in the song.   I listened to nothing except that track for a week to make sure I knew it inside out.  It is testament to the song that – even after this and editing the video – I still love it.

We filmed it all in one session in July.

I shot almost everything with the Canon 5D Mark III – it works so well with all that tricky black – and some with a monopod mounted 5D Mark II.
I also shot the first minute and a couple of other shots with a GoPro Hero 3 Black Edition. This let me shoot at 60FPS and some of the shots you see towards the end are slowed down from 60FPS to 25FPS. The GoPro is a fantastic little camera capable of amazing things. I used the Neat Video addin to help reduce the noise, which is the cameras only real shortcoming.

I used a starlight filter for maximum ToTP-ness. Mainly because no-one uses them anymore and they’re groovy.

Luis Fortuna was doing the theatre lighting and assisting with the audio playback.

For this shoot, as well as the theatre lights, I used a couple of LED lights: a big LED panel and my new Jinbei EF100 which I bought from the excellent Foto Morgen in Germany.

I have since bought another of these cracking lights from FM. They are the same form factor as studio flash heads and use the same Bowens S-fit adaptor. This means I can use my normal light modifiers, including my favourite, the Lencarta 150cm folding Octobox, which I used extensively here.

I also used one of these bonkers £25 160 LED lights as a hair light.
Battery life with a camcorder battery is fantastic. I used one from my long-redundant twelve-year-old Panasonic camera and it worked on full power for 2.5 hours.

I spent about five evenings banging this into shape and it very suddenly came together pretty close to what you see in the final cut. Everything was done in Premiere CC. There’s a bit of fiddling around with time and the big solarized wobbly BOOOOM! does a good job of signifying that important noise.

After the main cut was complete, Emmett added some nice touches as overlays. The lava, cloudy skies and fireworks are all his and I think they really work.

I won’t embed the video because I want you to watch it full screen in HD.  Here’s the link